All Buenos Aires All Day

What do you think of when you think of Buenos Aires? Images of Madonna must come to mind (if you're honest). Probably Steak. Maybe Empanadas. Maradona if you're a football fan. Empanadas if you eat out a lot,

Many folks think about the Casa Rosada (the Pink House) which is the Presidential Palace. The equivalent to our White House.

So that is where we headed.

After an amusing false start (almost every printed map of Buenos Aires has north to the right on the map, because the city fits better that way. (The Rio Plat is to the north, and the city sprawls alongside the river) Of course, Google Maps is more conventional, putting north up. So when we left our hotel, we headed in the 90° wrong direction. Being that we didn't have anything but a rough plan, that didn't really matter.

But in the meantime, we did see some local color. In the older (not yet hip) parts of Palermo, you still have little Pasta shops where they make their own pasta ever day. We walked past several of these before we decided we should grab a cab and pick a destination. That was the Casa Rosada: 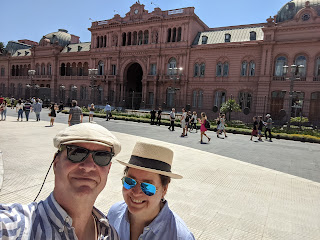 It is call the Casa Rosada for obvious aesthetic reasons, but the political reasons are more interesting. When the palace was built, it was the first time there was a join government between the Radicals (reds) and the Liberals (white). To show solidarity, they mixed ox blood and lime (red and white) t o create the pink stucco to protect the building. Interesting stuff. 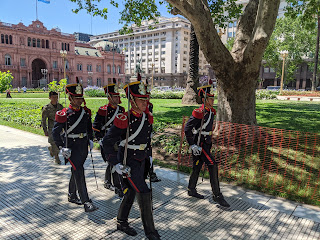 They had some soldiers marching that day.

Nearby there is a statue to Juana Azurdy, a guerrilla fighter against the Spanish during the wars of independence. This statue recently replaced one of Christopher Columbus. 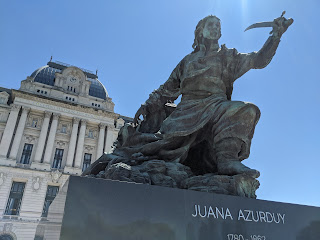 We tend to visit nature preserves when possible, and there is one right on the Rio Plat.

It was hot. That is the Plat below: 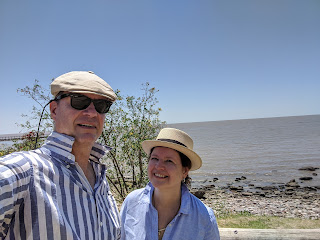 (The Rio de la Plata is not named for its color by the way. It is because it was a route from the huge silver mine at Potosí.)

But that brought is to lunch. Some of the best empandas of the trip, from El Hornero in the San Telmo market. I know what you're thinking - "San Telmo is known for the Tango, not empanadas!" yes, we'll get to that. 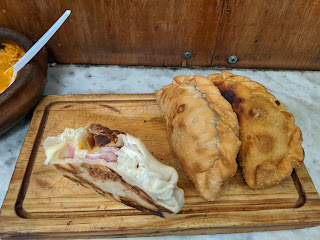 Eat type of pie (beef, chicken, ham and cheese) is folded differently so you can tell them apart without cutting into them. Clever. 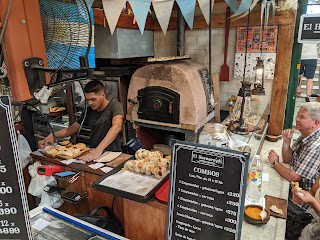 The market is an old covered market mostly now occupied by restaurants (more later on that, too) and small antique and dulce de leche stores. 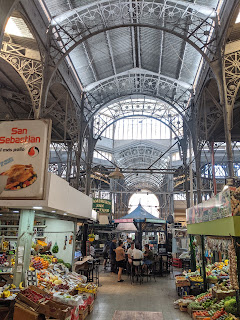 That brought us back to the hotel.

That evening, we decided that our last All Buenos Aires day would be meat. One of the most famous (and hard to get reservations) parrilla (Steak House) is Don Julio's.

If you are a Norteamericano, you can show up at 6:30, and when they open at 7:00 there will be a table waiting for you.

The food was great, starting with morcilla (blood sausage) mujeca (sweet breads) and ending with a great Malbec and perfect rib-eyes.

The country really has great meat. 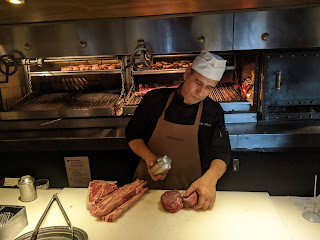 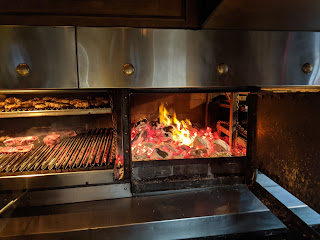